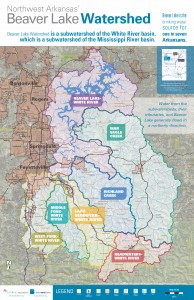 The Beaver Lake Watershed is the area that drains to Beaver Lake, the drinking water source for Northwest Arkansas. Beaver Lake is the first in a series of three U.S. Army Corps of Engineers reservoirs on the White River in Arkansas and Missouri. The White River headwaters originate in the Boston Mountains south-southeast of Fayetteville, Arkansas, flow north-northeast into Beaver Lake and discharge from Beaver Dam into the backwaters of Table Rock Lake. Beaver Lake is the primary water source for the fastest growing region of Arkansas, providing hydropower generation and water for individuals and industry, as well as recreational opportunities.

Beaver Lake was authorized by Congress to provide storage for flood control, hydropower generation, and water supply. Beaver Lake is crucial to meeting the region’s increasing demands for fresh, clean water. The quality of water in the lake is generally good, but a few areas of concern include eutrophication of upstream portions of the lake and sedimentation at the mouths of feeder streams. Regional growth has the potential to adversely impact the quality of water in tributaries of Beaver Lake and the lake itself. Expansion of the urban area and industrial activity within the Beaver Lake Watershed will increase nutri­ents and other pollutants delivered to the Lake.

Beaver Lake is the drinking water source for more than 420,000 people and industries in Washington, Benton, Madison, Carroll and Boone counties. Beaver Water District is the largest supplier of drinking water in Northwest Arkansas, supplying 320,000 people with drinking water. The District’s plants can produce up to 140 million gallons per day (MGD) of drinking water. Currently average daily use is about 45 MGD.Three other water suppliers – Benton-Washington Regional Public Water Authority (a.k.a.Two-Ton), Carroll Boone Water District, and Madison County Regional Water District – also operate on the lake today. Combined, the four provide water to one in seven Arkansans.

Water districts each have an allocation of space with­ in Beaver’s conservation pool for their water supply. In return, each district makes an annual payment to the United States government for their pro-rata share of the costs oper­ating and maintaining the reservoir and amortization of the capital investment in the dam and reservoir. Beaver Water District, one of four public water suppli­ers withdrawing water from the lake, works with stake­holders through outreach and education programs, such as the Beaver LakeSmart Environmental Education Program and the Beaver LakeSmart Water Quality Programs tool to preserve water quality and protect this resource.

One primary reason for constructing Beaver Dam was to provide flood control. Roughly 287,000 acre feet of flood storage are provided in the reservoir’s flood pool (between elevation 1120.43 and 1130). Rainfall is captured in the flood pool to prevent flooding down­ stream. During flood events, the lake may rise into the flood pool. Water in the flood pool is released over time, through hydropower generation or by opening the flood gates to return the lake level to the top of the conservation pool, the normal operating level. The release rate is balanced against the capacity of down­ stream reservoirs to receive the water. The U.S. Army Corps of Engineers is entirely responsible for flood control use of the reservoir.

Power generation from Beaver Dam is managed by the Southwestern Power Administration (SWPA) under the Department of Energy. Beaver Dam houses two generating units that pro­ duce 56,000 kilowatts of power each, with average annual production of 172 gigawatt hours. Electricity is sold to rural electric cooperatives, municipal utilities and military installations and $4.5 million in revenue are produced annually as a result of these sales.This is used to repay the cost of maintaining the generating and transmission facilities operated by SWPA, as well as repaying the Federal investment in the dam facil­ities.

Recreation and aquatic life are allowed uses of Beaver Lake under its congressional authorization. Environmental Quality under authority of the Clean Water Act also designates waters of Beaver Lake as suitable for recreation and aquatic life uses. Recreational facilities include eight marinas, 11 recre­ ation areas, and multiple hiking trails around the lake. Hobbs State Park and Pea Ridge National Military Park are nearby. Recreation activities, fishing, boating and swimming are dependent on both water quality and quantity. The lake and associated park areas also sup­ port other types of recreation including camping, picnicking, scuba diving, hunting, hiking, bird watching, and sightseeing.The economic benefits of Beaver Lake include $30.24 million in visitor spending within 30 miles.