The Beaver Lake Watershed is part of the upper White River Basin Watershed. This watershed is situated within the Ouachtia-Ozarks Interior Highlands physiographic area of the United States. 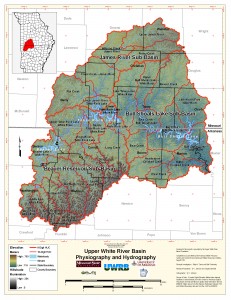 Situated within the Ozark Plateau in Missouri and the Boston Mountains in Arkansas, the upper White River basin lies primarily atop mantled karst topography. The karst landscape typical of the Ozarks region is characterized by underground streams, caves and sinkholes formed by slowly dissolved bedrock. As water penetrates cracks and fractures within the rock it travels though a network of underground systems and enters aquifers and water tables, making it exceedingly vulnerable to contamination.

The upper White River watershed encompasses over 300 miles of river. From headwaters to confluence with the Mississippi River, the White River flows approximately 720 miles and crosses two states. The upper White River watershed is divided into three main sub-basins: Beaver Reservoir, Bull Shoals Lake and James River. While the basin is primarily rural and agricultural, burgeoning communities like Springfield and Branson, Missouri and Berryville, Fayetteville, Springdale and Rogers, Arkansas are growing communities located in the watershed.

Home to over a million people, the upper White River Basin is comprised of ten counties in northwest Arkansas and nine in southwest Missouri, covering an area of over 14,000 square miles. Since the Foundation of Ozarks Water Watch in 2001, the population of this region has substantially grown, with the average population growth at 8.5%. Some counties, like Benton County in Arkansas and Christian County in Missouri, have seen growth over 27% in the past five years alone. Urbanization and rural development is increasingly becoming a significant cause of water quality problems in the basin.

Impervious areas, those hard surfaces like rooftops, driveways, parking lots, streets and compacted earth, divert rainfall which would normally enter the ground into urban runoff. Runoff carries with it any substance from the surface; in urban areas this is often oil, gasoline, antifreeze, tire residue and lawn fertilizer, among other things. This polluted runoff is then deposited into storm drains and nearby streams.

Animal production and operation in the region also have a significant impact on water quality in the upper White River basin. Animal manure, when applied as fertilizer and as a direct source contaminant, results in increased nutrients such as phosphorus and nitrogen and as bacteria loading for surface and ground water.

Because of rapid population growth in the area, many people are locating to areas which are not served by municipal sewers. Wastewater treatment is provided onsite through the use of septic systems. Considering that regional soil attributes are generally rocky and thin with very little topsoil, conventional septic systems consisting of a septic tank and drain field are often ineffective for the region. When improperly maintained, effluent leaches into the ground and directly into water sources.

Ozarks Water Watch is a 501(c)3 not-for-profit organization to fulfill the mission of promoting water quality in the upper White River basin of Arkansas and Missouri, its four major lakes – Beaver, Table Rock, Taneycomo, and Bull Shoals, and the many streams and rivers which flow into them.  You can learn more about the upper White River Basin, sign up for a weekly newsletter, and connect on facebook through Ozarks Water Watch.