For the past 4 years Ozarks Water Watch has been a partner for Secchi Day on Beaver Lake, a public water quality educational and monitoring event sponsored by Beaver Water District. This year marked the 10th anniversary of the event and 10 years of Secchi Day data on record.  We have just received the Secchi Day data report and press release for 2015. The big question on everyone’s minds is whether there are any trends that can be identified, now that there’s a decade of data to consider. To put it simply, how is the water quality in Beaver Lake doing?

Dr. Bob Morgan, Manager of Environmental Quality for Beaver Water District (BWD), and Sabrina Bowman, Environmental Specialist, shared data and comments about Secchi Day with BWD Board members during their regularly scheduled meeting held at noon today. Bowman reported that eight new volunteer sampling teams participated this year and a total of 30 teams covered 35 sample sites throughout Beaver Lake. Many of the veteran teams have been participants every year since the event began in 2006. Sampling teams take Secchi disk readings to determine water clarity, and collect water samples which are tested for chlorophyll a, total phosphorus, and nitrate, to determine algal density and nutrient concentration. Secchi depth is a measure of water transparency that involves lowering a black and white disk into the water and recording the maximum depth in which the black and white pattern can be distinguished from above the water’s surface. 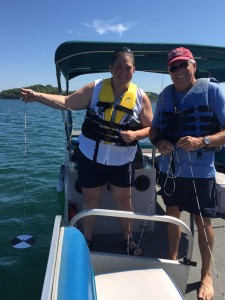 Morgan said, “Overall, everything was slightly better this year than the average of the data over the past 10 years. However, the data tell us that the water quality is not rapidly changing one way or the other, at least in late summer. In other words, the lake water quality is maintaining, and that’s what we want to see.”

He added that one of the longtime volunteers said he helps collect data so that someday far into the future, maybe 50 years from now, people will have records of how clear and clean water in the lake used to be. That observation was very astute as our memories of what used to be tend to degrade over time. It maintains a record of what can be.

This year, the greatest Secchi depth was 5 meters, or approximately 16 feet. This occurred at site 29 near Beaver Dam. The lowest depth of 1.05 meters, a bit more than 3 feet, was measured at Site 1 at Hwy. 412 Bridge. The average Secchi depth for 2015 was slightly greater than the 10-year long term average of 2.7 meters. Near surface mean concentrations for both chlorophyll a and nitrate were lower in 2015 than in the last nine years. Secchi depth in late August is inversely related to the concentration of chlorophyll a. Therefore, as chlorophyll a decreases, Secchi depth increases. 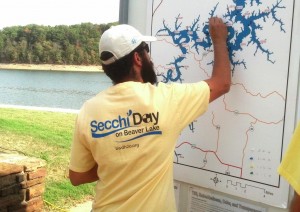 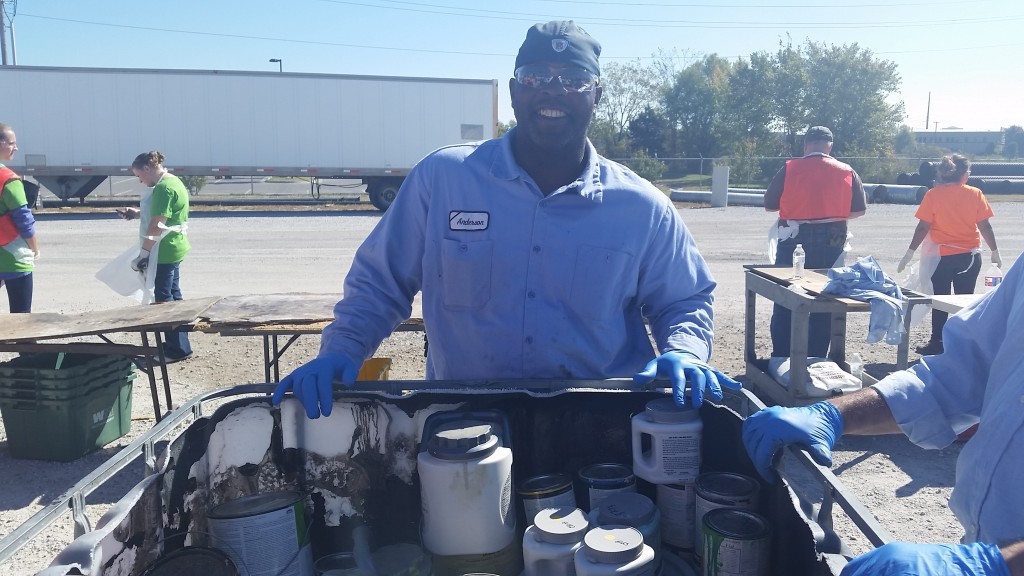 This year’s fall cleanup saw 917 loads of materials dropped off across the three cleanup sites in Bentonville, Decatur, and Garfield. 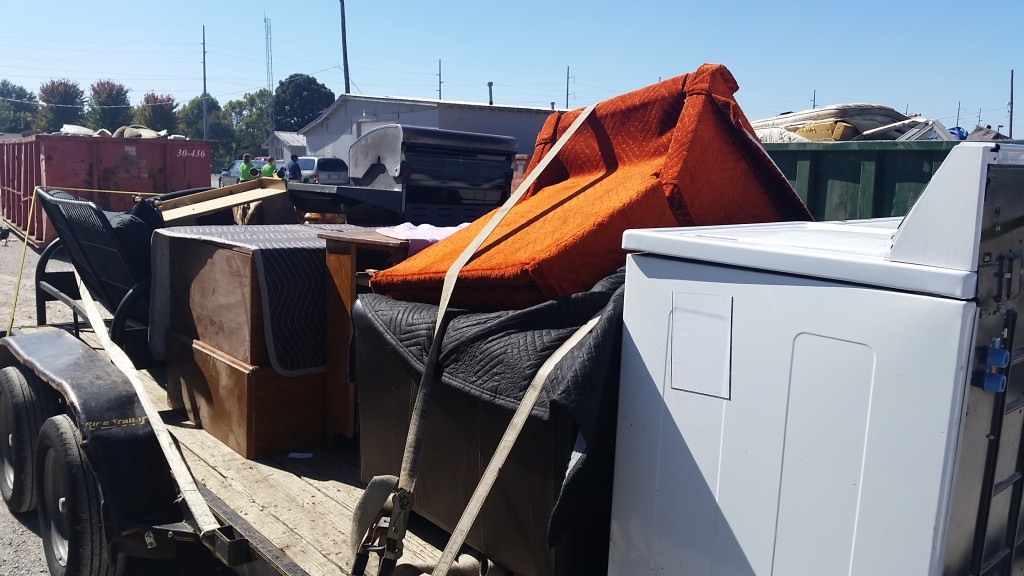 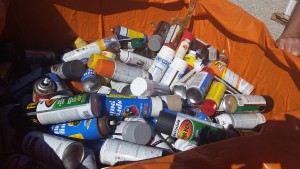 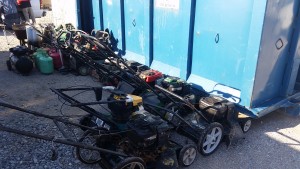 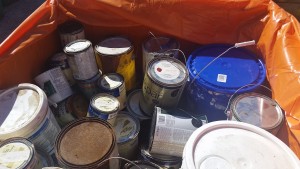 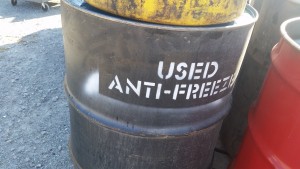 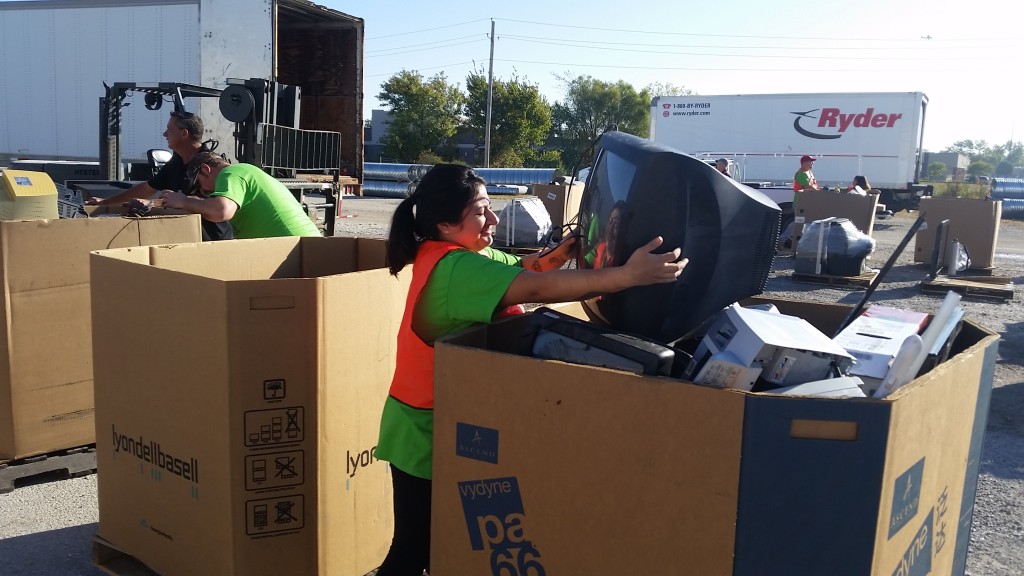 Educating residents on the proper disposal of household hazardous wastes has been an important part of the Beaver LakeSmart program.  You can access our household hazardous waste information here.  As part of our participation in the annual cleanup, Angela Danovi, program director  of Beaver LakeSmart assisted with collecting over 250 gallons of used oils that will be recycled. 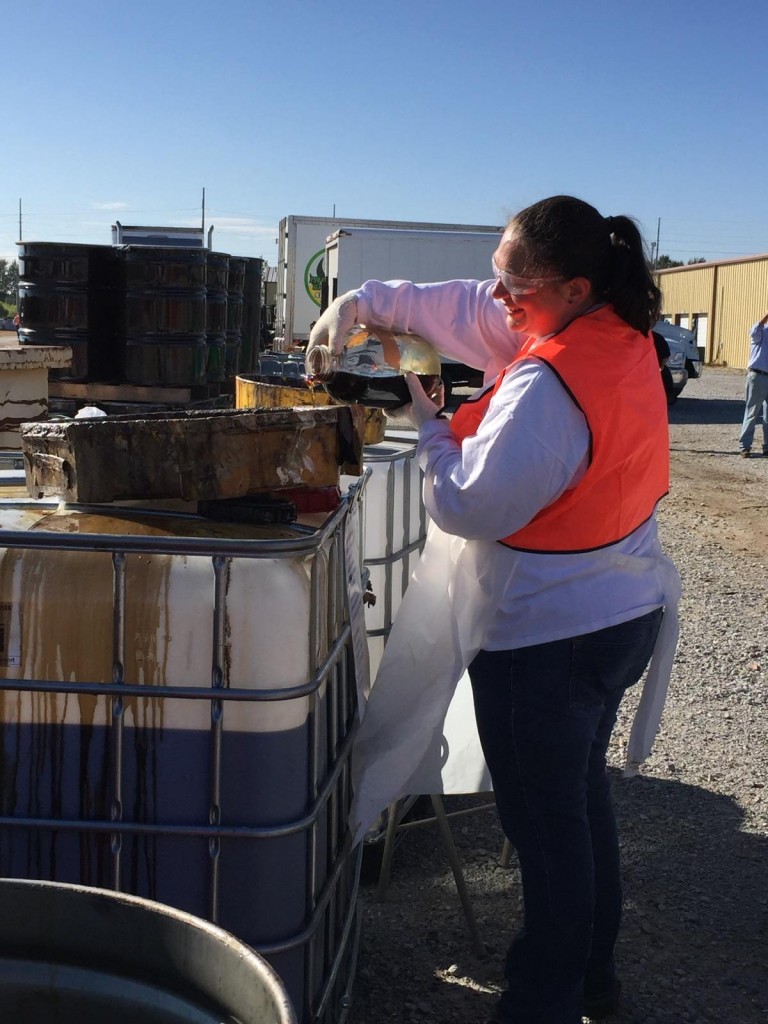 Yes, we cleaned up the side of the container with special wipes to keep the oil from going on the ground!

In addition to our participation in the cleanup, this year we had the opportunity to provide education to each of the 917 attendees on managing latex paint. Each attendee received a flyer that promoted the new convenience center program beginning in 2016 and on the back they received information about managing latex paint at their home. This was an important informational piece because paint is often improperly disposed of and can adversely affect water quality and the environment.

Download your own copy of the latex paint disposal flyer here. 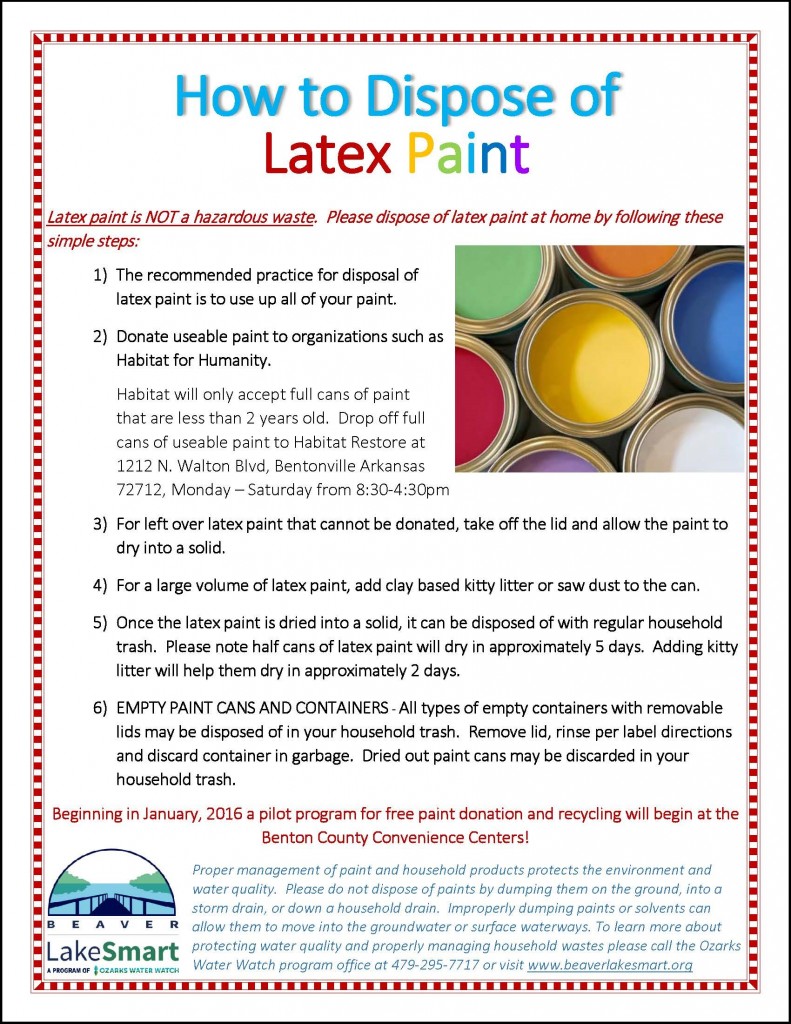 As Benton County has continued to grow and demand for the cleanup has grown, Benton County and Benton County Environmental have been looking for ways to serve more people more often in the county.  Beginning in 2016, the Benton County Solid Waste District and the Benton County Environmental Division are joining forces to bring the citizens of Benton County a better alternative to the twice-yearly cleanup events.  A new pilot program will begin in Benton County through the convenience centers.  It is the goal of the pilot program to better serve the needs of the citizens and better utilize taxpayer funds by making recycling and proper waste disposal more accessible and in turn reduce the amount of waste dumped on county roads, dumped into waterways, or put into landfills.  Best of all, the convenience centers will be completely free for residents to use!

The convenience centers will collect all of the same materials as the cleanup events but with 4 advantages:

Final details on the new convenience centers are being completed at this time.  For more information about this program call 479-271-1083.