One of the most noticeable differences depicted above is the water color.  After the 10-inch rainfall and extreme flooding in late 2015, the Prairie Creek area on Beaver Lake experienced high turbidity until late spring and early summer in 2016.  In the bottom photo taken this month, the lake has retained its blue color because lower rainfall has reduced the amount of sediment flushed into waterways that lead to Beaver Lake. Other noticeable differences is greater shoreline exposure, enlargement of the land exposed around the island towards the middle of the lake, and the exposed point bar extending out into the water on the right hand side of the photo.

Beaver Lake levels have been steadily dropping since May 28, 2016, when it was at 1122.04, over 11 feet higher than current levels. Currently, lake levels have reached their lowest point in over three years, and are over 13 feet lower than this time last year, resulting in much of the exposure of shorelines, islands, and sandbars many people are currently finding in Beaver Lake. 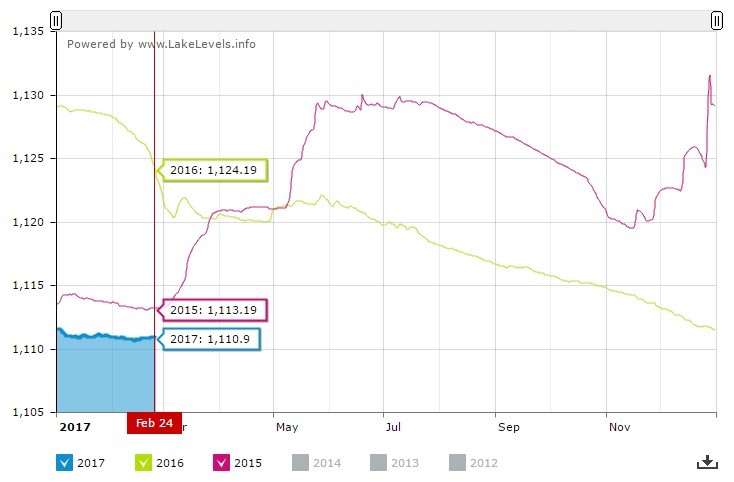 Low lake levels in Beaver Lake are connected with overall below average rainfall for the area. 2015 ended over 17 inches above normal in precipitation, with a huge rainfall occurring just at the end of the year.  However, throughout 2016, nearly all of the precipitation gains from the previous year were lost resulting with nearly 15 inches below normal in precipitation, and over 32 fewer inches of rainfall compared to 2015 totals. The trend has continued into 2017. 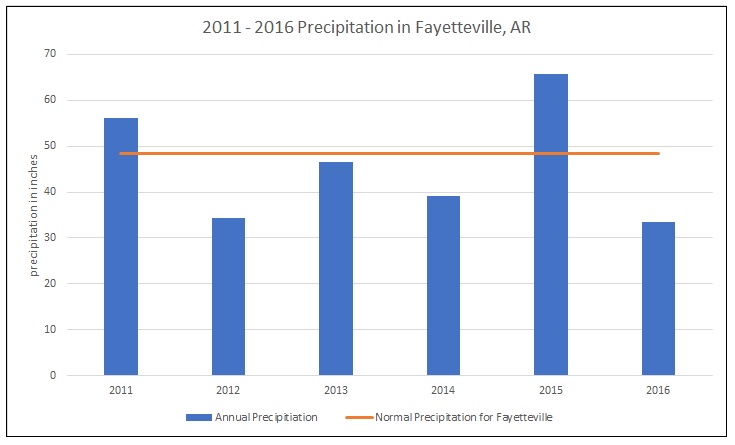 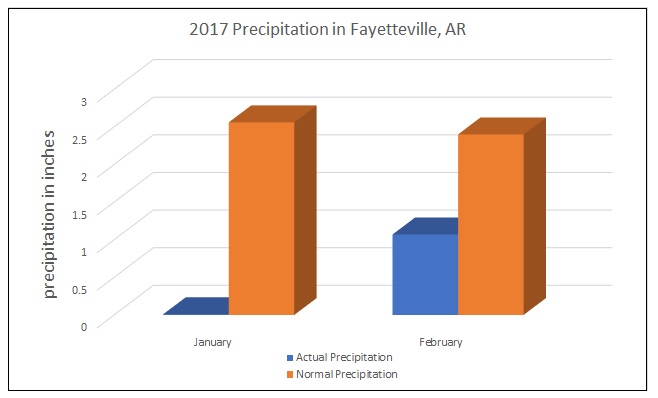 Precipitation received in Fayetteville, AR through February 27, 2017. Data from the US Climate Data. 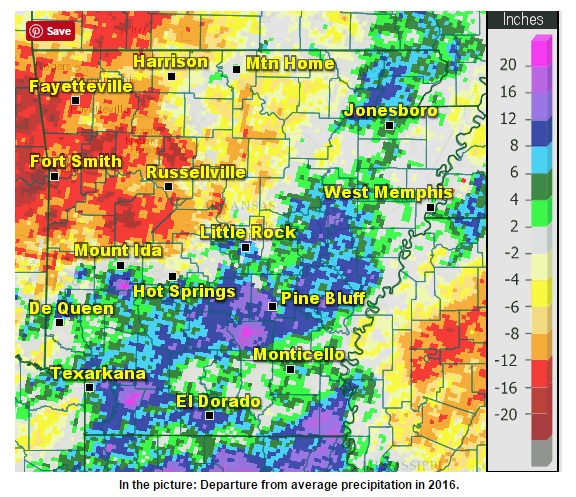 US Drought Monitor issues a weekly national, regional, and state drought report, here.  On February 21, 2017 73.61% of Arkansas was in some state of drought. Moderate drought covered 33.46% of the state, severe drought 14.80%, and extreme drought 2%. The estimated population in drought areas in Arkansas was 1,082,106 people.  Notably, one year ago, no part of Arkansas was considered in a drought. 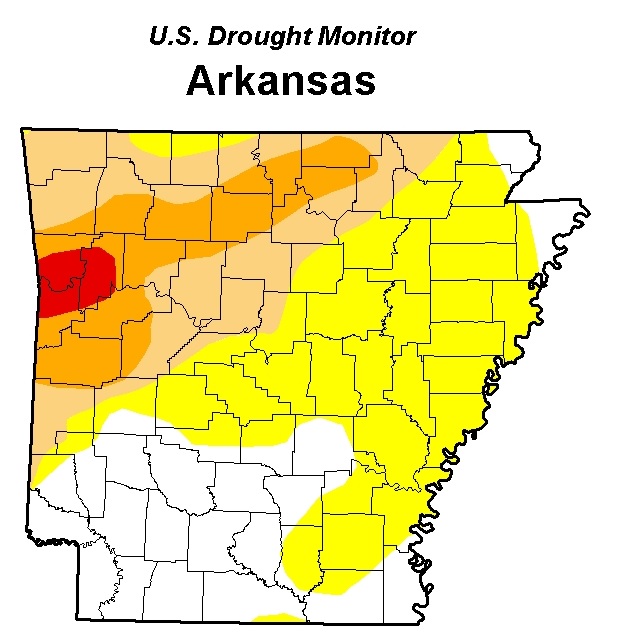 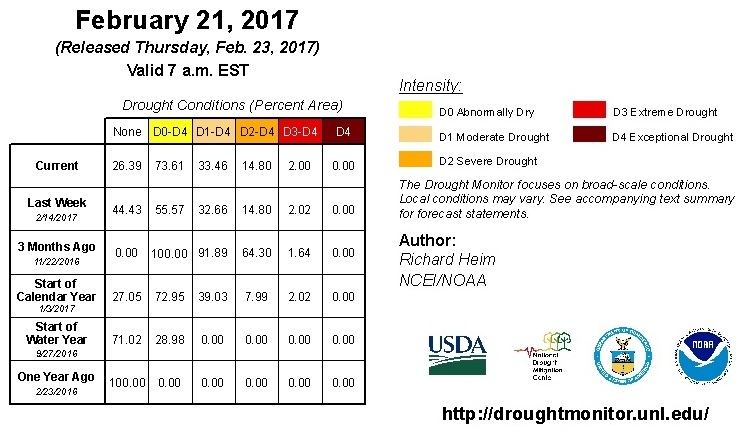 Arkansas Drought Map on February 21, 2017 by US Drought Monitor

Nationally, this area was one of the driest places in the nation during the last weekend of February. The US drought monitor identified Northwest Arkansas, eastern Oklahoma, and a corner of Southwest Missouri as receiving dominant impacts from the drought.  They also identified the area as being in a long-term drought, typically longer than 6 months.

One good resource to use to evaluate conditions is a climograph, such as the one pictured below. Climographs provide long-term average temperature and precipitation data for a specific area.  If we continue to have warmer than normal temperatures with below average rainfall, we will see drought conditions persist corresponding with lower lake levels and other water quality and quantity concerns associated with drought.

There are limited predictions concerning the long-term drought status in this area. The National Weather Service and NOAA predict the area will see some drought relief through May.

Drought outlook through May 2017. Map by the National Weather Service at https://www.weather.gov/lzk/drought.htm

Until additional rain comes, the lake levels will continue to be below normal.   Be careful on the lake and in the waterways.  Continue to practice good best management practices to reduce runoff and negative impacts on water quality.  Additionally, this may be a good time to think about getting or making a rain barrel to capture some of that water so you can have it when you will need it. 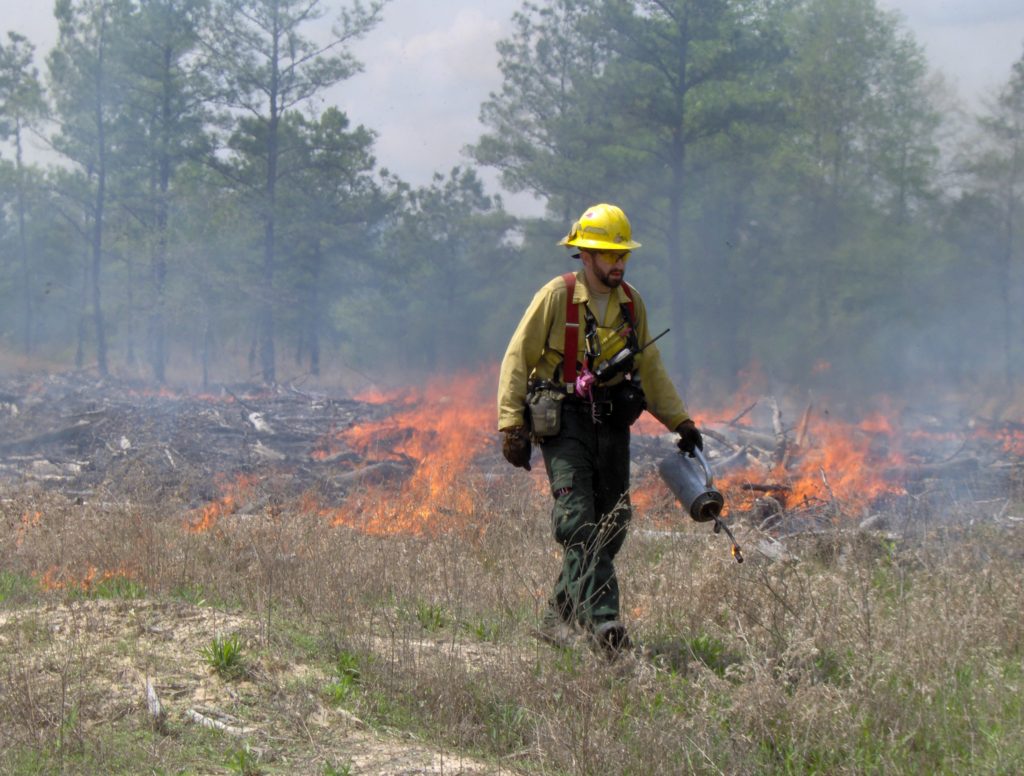 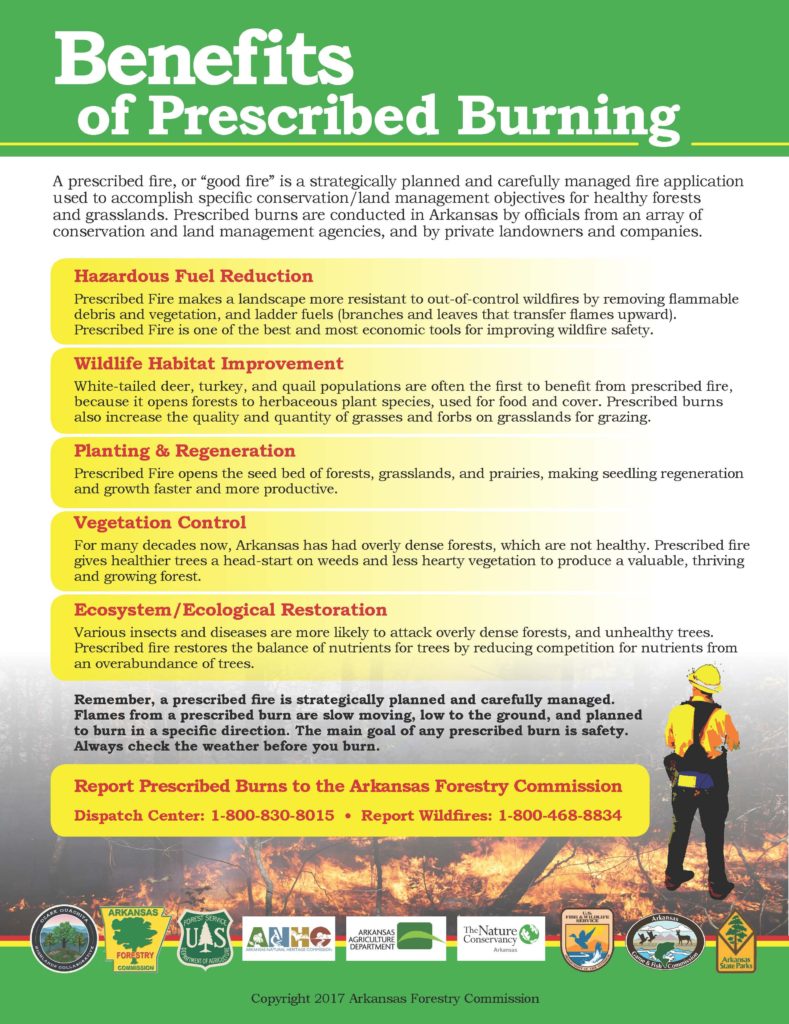 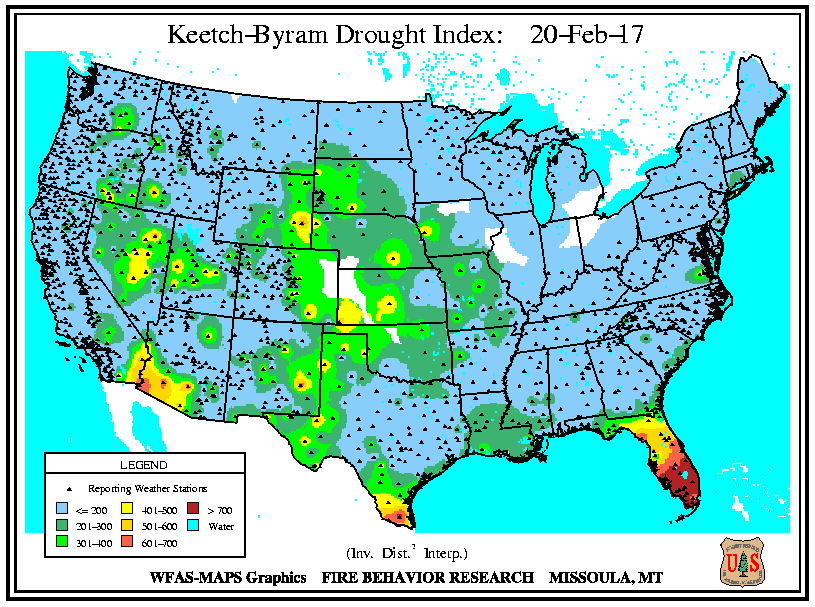