Our annual StreamSmart volunteer training is coming up on Saturday, July 15.  StreamSmart volunteer training is a day-long program that will provide training for new and current volunteers who want to become part of the stream volunteer monitoring in the Beaver Lake Watershed of Northwest Arkansas. Training will begin at 9am and conclude at 3:30pm. The morning session will include classroom learning of the streamsmart volunteer monitoring protocol. Attendees will receive a training manual and a free lunch. In the afternoon, we will visit a nearby stream where attendees will get to practice their new skills. Attendees will leave the training as members of a new or existing StreamSmart team and will be prepared to work independently on a team to do volunteer water quality monitoring. 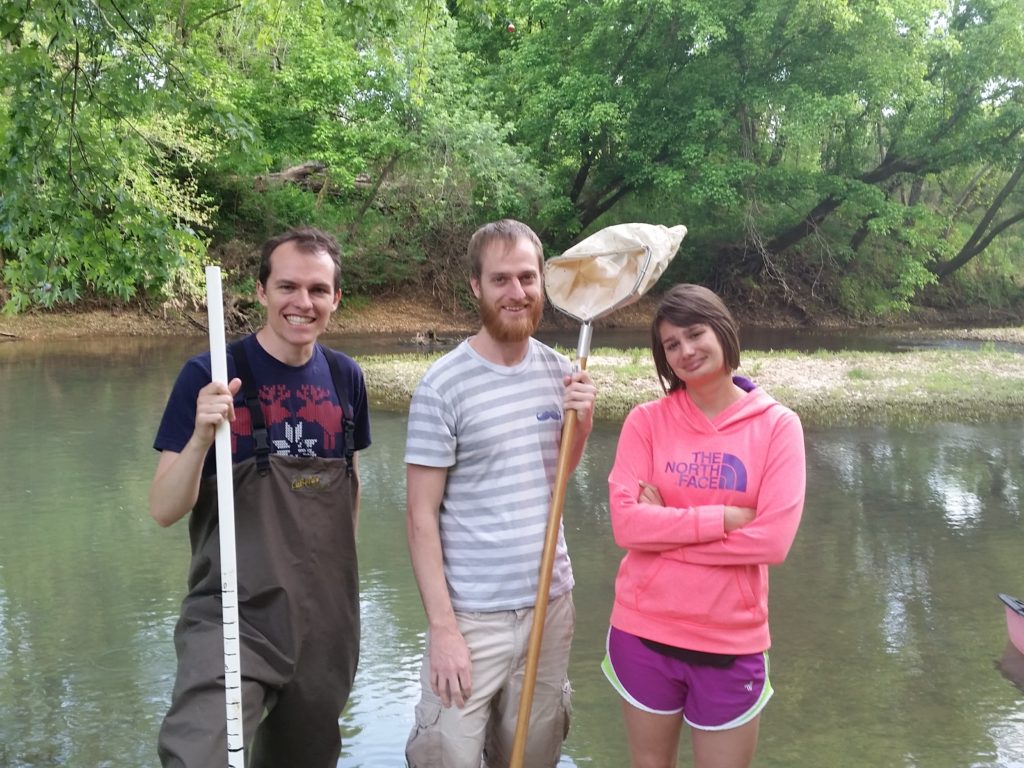 During a Saturday in early May, I visited ArTex Ranch as part of a Best Management Practice workshop focused on land management, timber stand improvement, prescribed burnings, and wildlife management.  ArTex is a privately owned ranch, located in Washington County, southeast of Fayetteville.  The property straddles between Middle Fork of the White River subwatershed and the Lake Sequoyah subwatershed within the Beaver Lake Watershed. 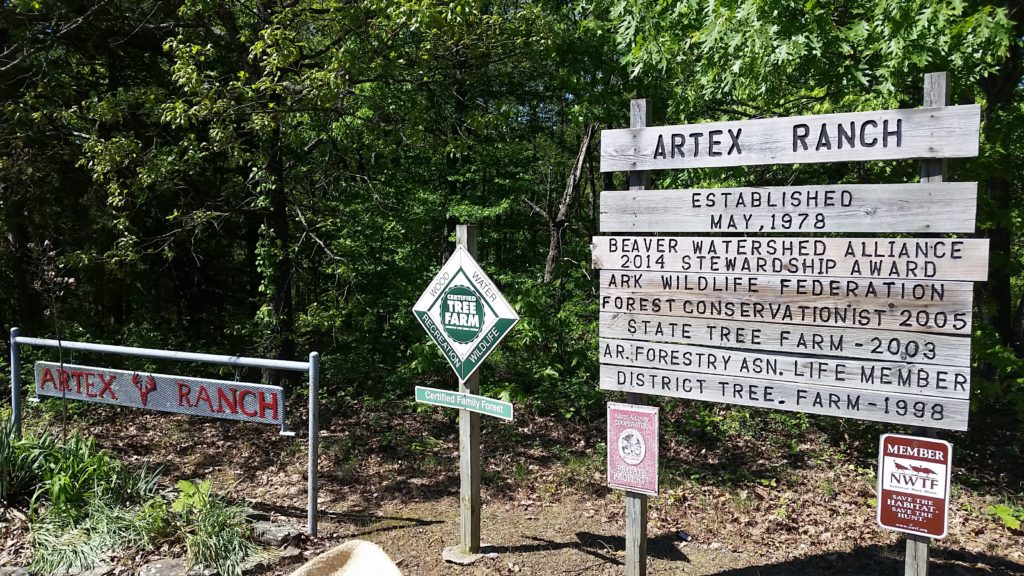 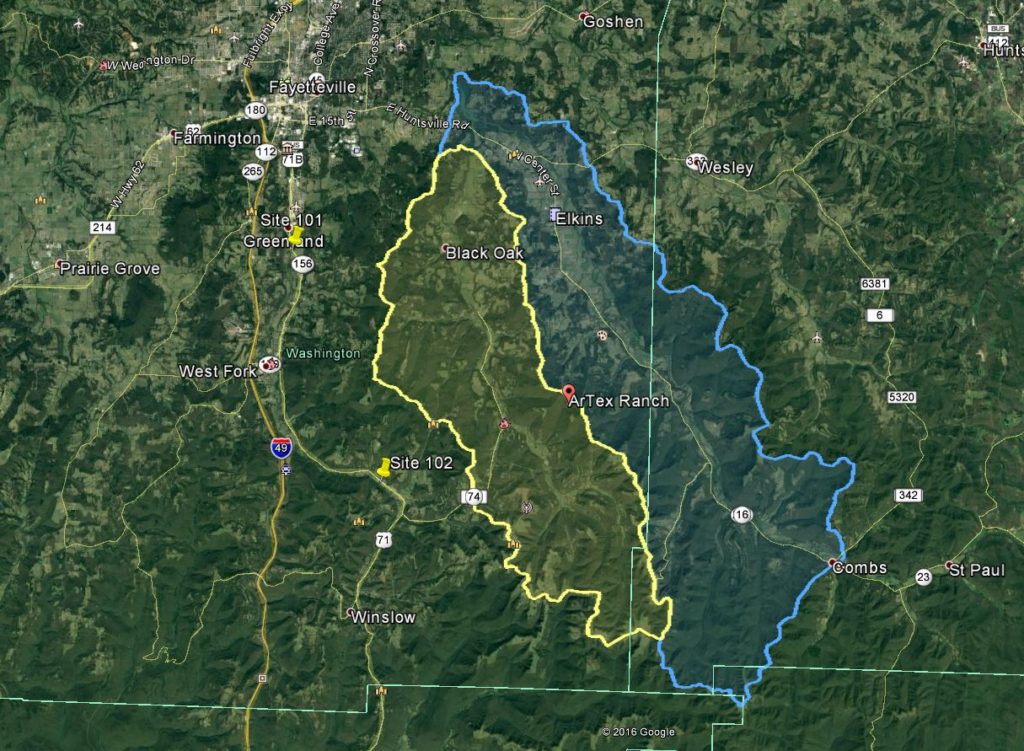 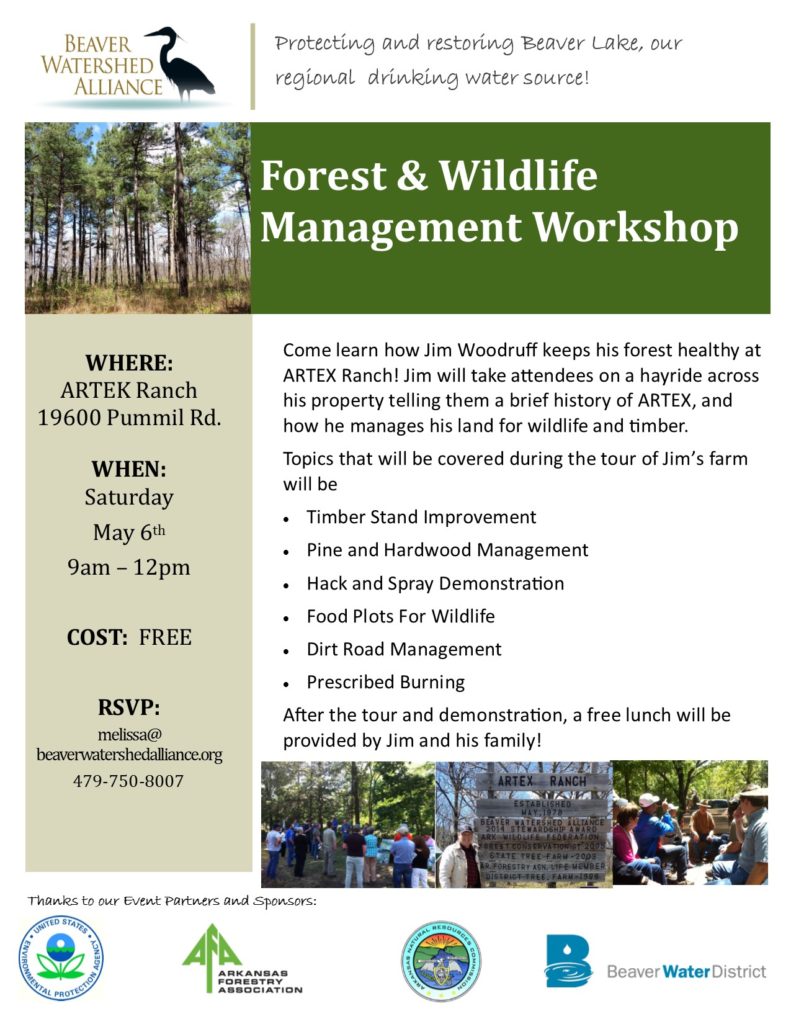 The morning began in the beautiful wood lodge over coffee and donuts while chatting with several local landowners and ArTex co-owner, Jim Woodruff.  The lodge was decorated with mounted deer head, bobcats, and turkey found on the property.  It was like being at a private camping retreat.

Jim gathered us around the fireplace and talked about his approaches to land management.  His main message was for each landowner to be able to identify the goals for his or her property.  The primary goals at ArTex Ranch include timber production and wildlife management but land stewardship also remains an important goal.  As part of land and a timber management, Jim mentioned three primary strategies he uses on his property: prescribed burning (described in a previous blog), hack and spray, and selective cutting of timber stands.  These strategies help clear dead, damaged, or overgrown trees and allows sunlight to the forest floor, stimulating new growth and while providing habitat for wildlife. 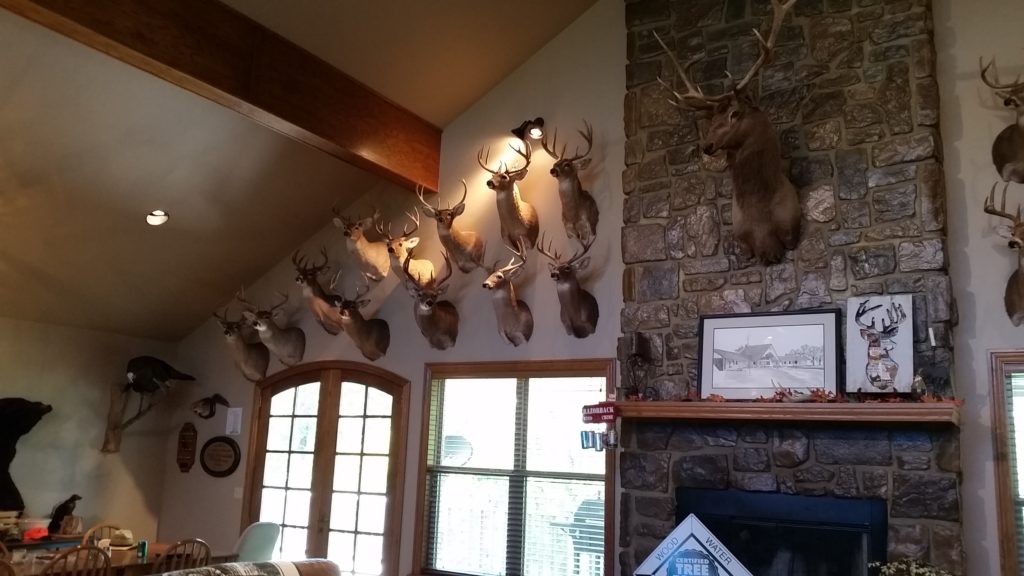 After our morning coffee, we headed out on a hayride tour of the property.  There is a long history associated with ArTex Ranch. Markers line the main road commemorating historical homesteads, landowners, and their family members who have passed away.  Picturesque rock walls can also be seen, indicating an active history on the land.  On this day, however, we were there to see current best management practices and to learn techniques that could be replicated in the watershed. 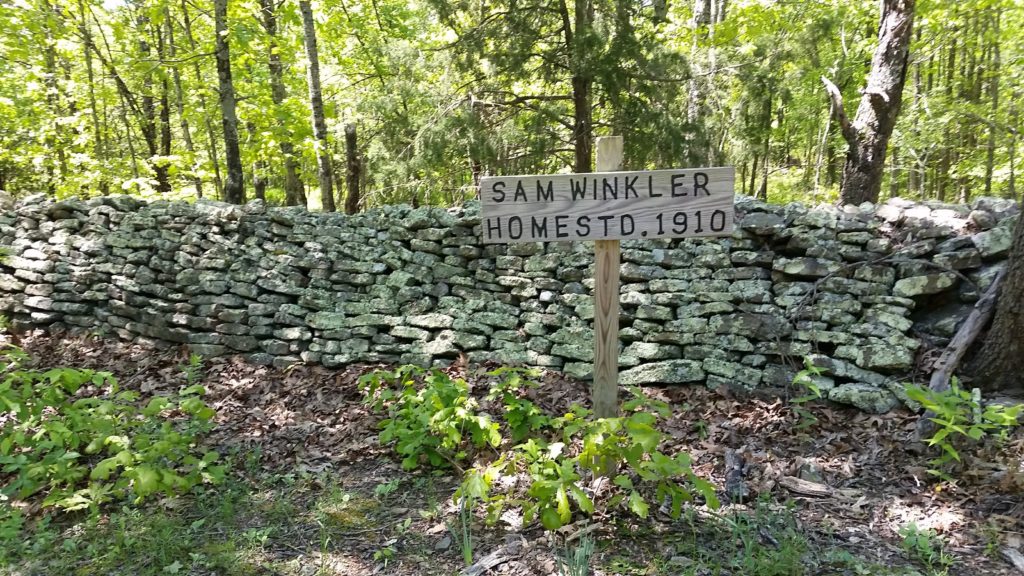 Jim stopped at one of the timber plots and demonstrated hack and spray.  Just beyond the edge of the road was a young tree that was not well developed.  It was bent over and crowding out a stronger, older tree.  Jim took one hack into the tree and sprayed it with an herbicide.  The herbicide, he said, would kill the tree with just one application.  After applying and reapplying store-bought herbicides, Jim obtained his herbicide applicator license and now uses stronger and more regulated herbicides on his property.  Although the cost for the herbicide was greater per batch, Jim said it was more effective and he was ultimately using less herbicide overall.  This was an important fact for me to learn, because it means Jim is putting less chemical in the environment and in the watershed to manage his property. 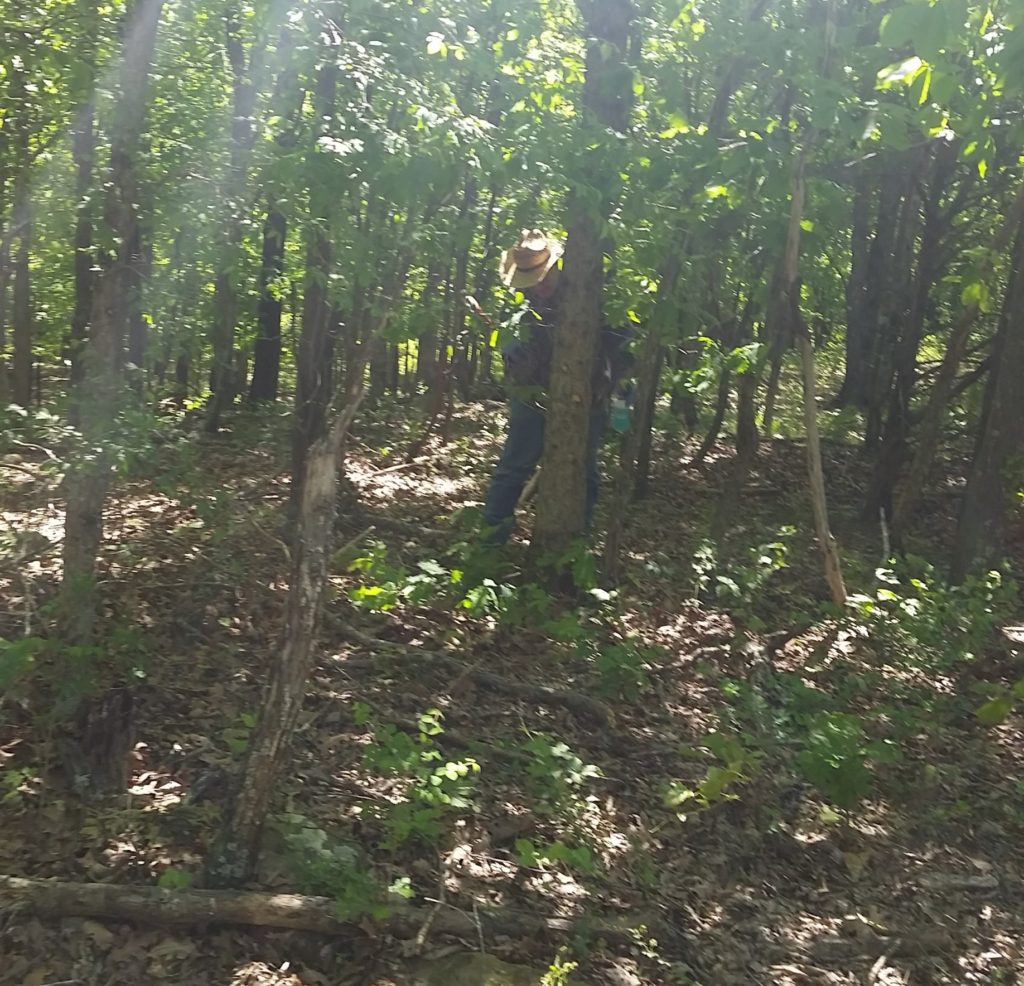 Throughout the property, we visited plots that were in various stages of growth.  Each plot was identified by a marker with the plot number, month, and year it was planted.  Many plots have gone through various thinnings by selective cutting, hack and spraying, and prescribed burning.  All of these techniques promote growth of timber while allowing the forest floor to receive sunlight and allow succession to occur within an existing stand while protecting sediment from running off and reducing competition for nutrients. 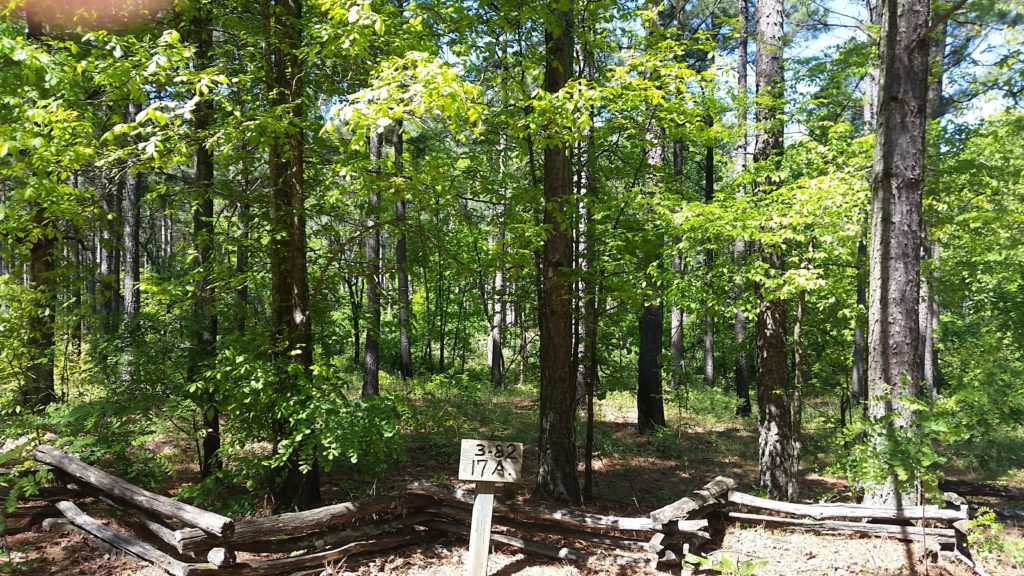 In addition to timber management, other best management practices were highlighted, which could be helpful for rural landowners, especially those who manage their own roads, like at ArTex.  As we drove around the property, we passed over places where the road was built up, similar to a speed bump, sometimes followed by a dip in the road.  These structures, known as water bars, are designed to manage water movement across the road, rather than allowing rainwater and runoff to flow across the road.  Water bars are generally installed diagonally across a road and divert surface water (that would otherwise flow down the whole length of the road) off the road and into a stable drain way. Water bars reduce erosion that is often prevalent on dirt roads, which keeps the roads maintained over a longer period of time and reduces sediment carried from the road by water.  Water bars are another land management strategy that both helps a landowner effectively manage their property while also protecting water quality. 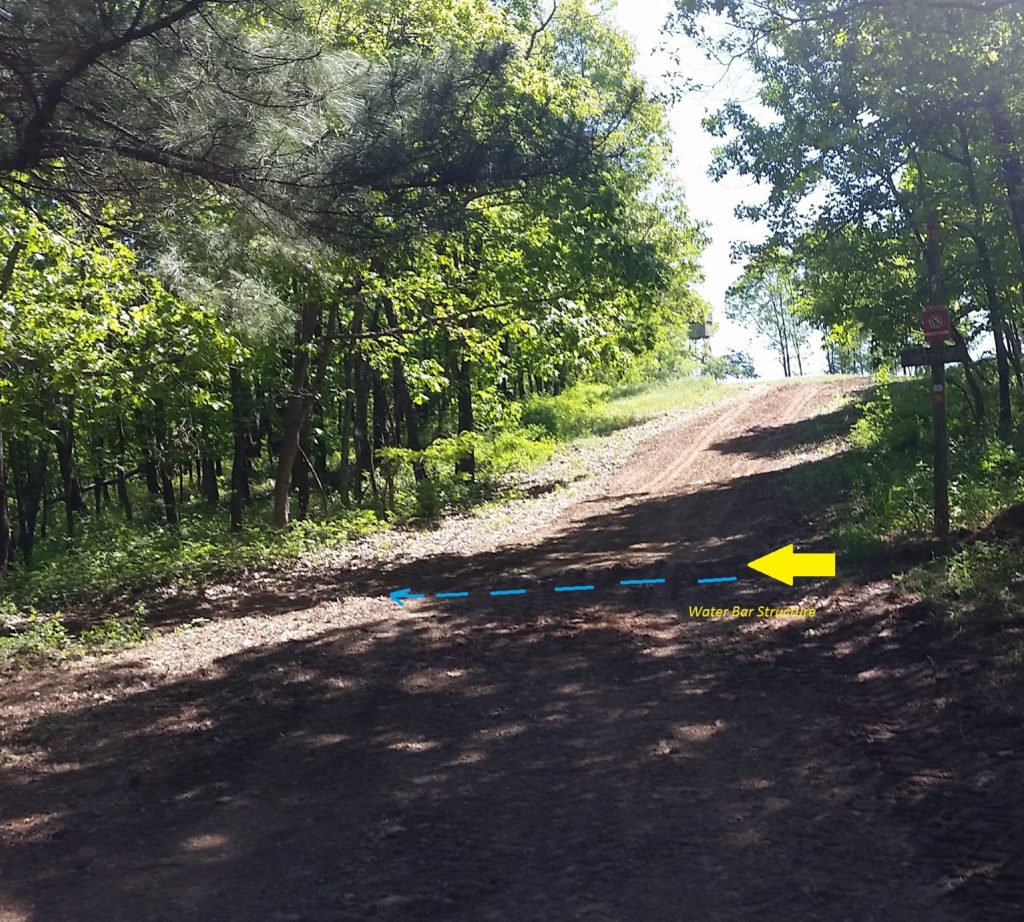 Although much of the property at ArTex is managed for timber production, many fields are managed for wildlife.  Jim recommended using a seed mix of native grasses and flowers that can provide food for wildlife.  He also recommended creating edge of field transitions between open fields and forests where wildlife and birds prefer to live. 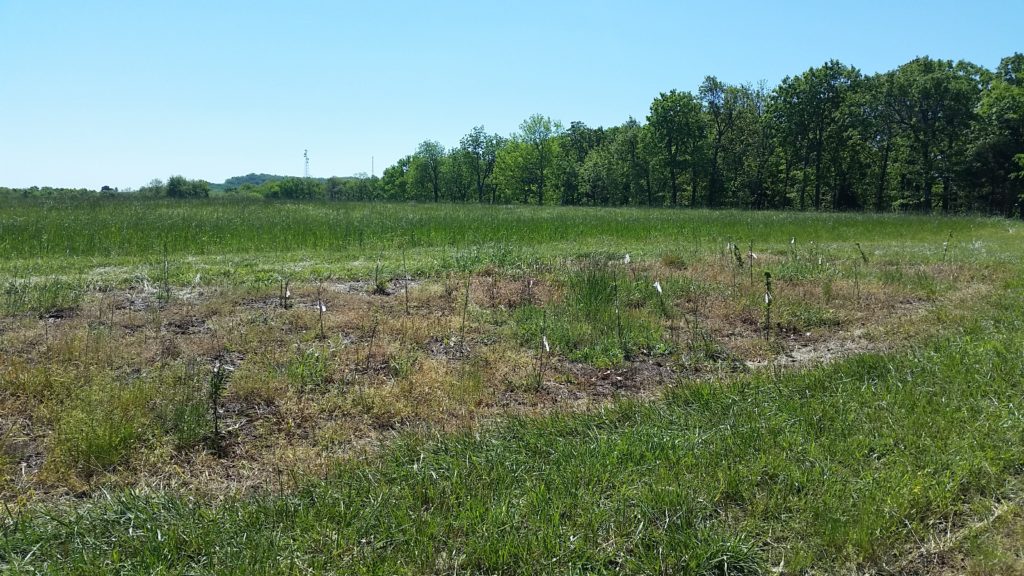 In addition to timber production and wildlife management, ArTex also supports the Ozark Chinquapin project.  Six Ozark Chinquapins were planted in 2015 and five are currently surviving at this test plot.  Each seed is planted in the ground and then a tube is placed over the planting to allow the tree to grow while protecting it from predators such as deer, squirrels, and raccoon.

The Ozark Chinquapin (Castanea ozarkensis), sometimes called Ozark Chinkapin or Ozark Chestnut, was drought tolerant, grew to heights of 65 feet, 2-3 feet diameter, and grew on acidic dry rocky soils on hilltops and slopes. It bloomed in late May- early June after the threat of frost.  The trees produced a bounty of sweet nuts every year without fail, and was sought as a nutritious food source by humans and wildlife. The wood was highly prized because it was rot resistant and made excellent railroad ties and fence post.  Logging practices and later the chestnut blight (Cryphonectria parasitica) wiped out the Ozark Chinquapin. Today only blighted stumps remain of this once important Ozark tree. Sprouts emerge from the stumps, many managing to produce some nuts, but within 4-6 years the blight again strikes killing the sprouts, starting the blighted cycle all over again. The number of surviving stumps and the historic range of the tree continue to shrink.  Through the Ozark Chinquapin Foundation, work is being done to restore the Ozark Chinquapin to its native range through research and cross-pollination of surviving trees to develop a 100% pure Ozark Chinquapin that is blight resistant.  Throughout the Ozarks, test plots, such as the one at ArTex, are being planted to support the growth and re-emergence of the Ozark Chinquapin. 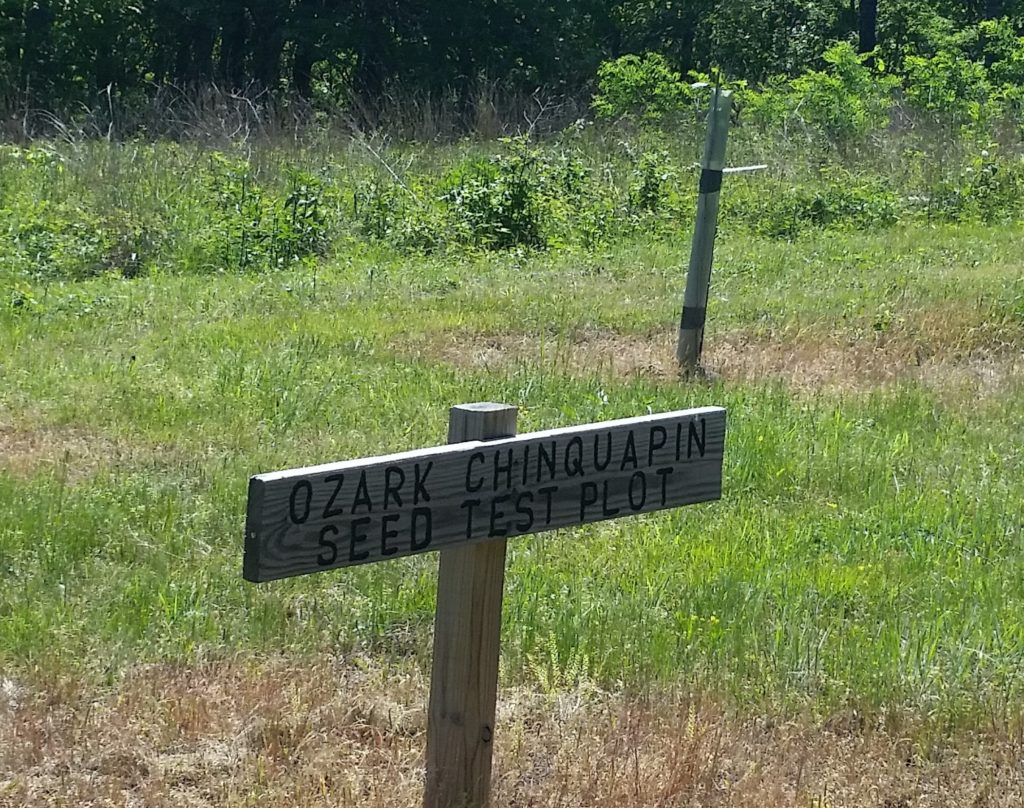 On the way back to the lodge, we were stopped to see the view and hills that overlook ArTex Ranch.  It was a beautiful and inspiring sight that only adds to all of the great best management practices being done at ArTex to protect our water while promoting healthy wildlife and forests in our watershed. 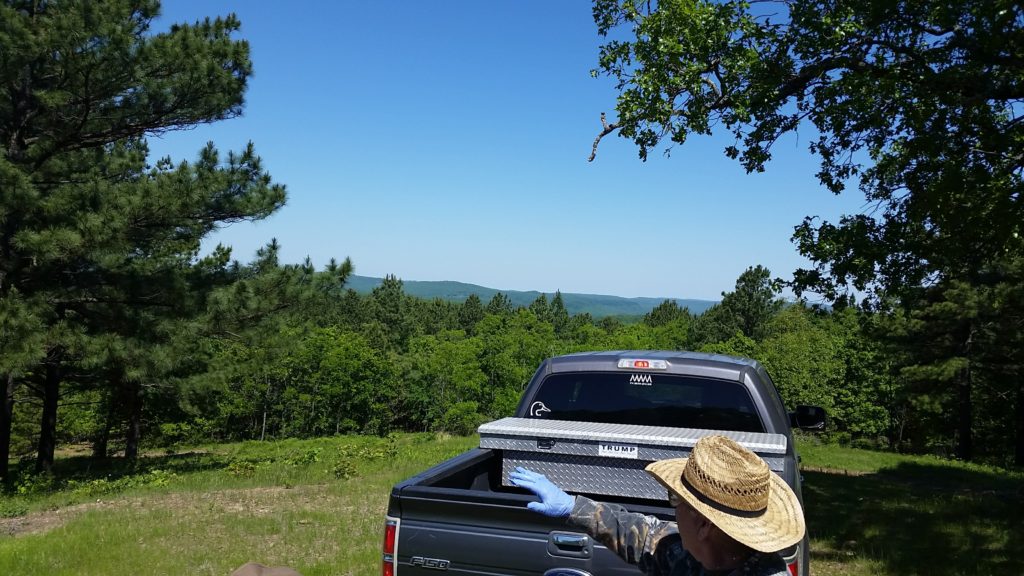